A City Guide to China

The concept "city" in China may be different from what you've been used to. Think BIG is necessary here.

The Concept of China City

There are three levels of cities in China according to China's administrative divisions:

Over 160 cities in China have over one million population.

Municipalities and prefecture-level cities are not really a "city" in the strictest sense of the term. They are actually administrative units that typically comprise both an urban core, which is the word city we normally mean, and surrounding less-urbanized and rural areas, which can be many times of the core city.

To better understand this, we may try to find their equivalent in US terms. However, the municipality is a political designation defining regions under control of a municipal government. We could not find a comparable division in US term.

Below on this page are:

These cities are also the major cities of China with economical /political /cultural importance and tourist attractions. Click each city name to see details.

Shanghai: One of the four China Municipalities and the "Paris of the Orient."

Nanjing: The capital city of Jiangsu Province and a city that once was the capital of 10 dynasties and regimes. 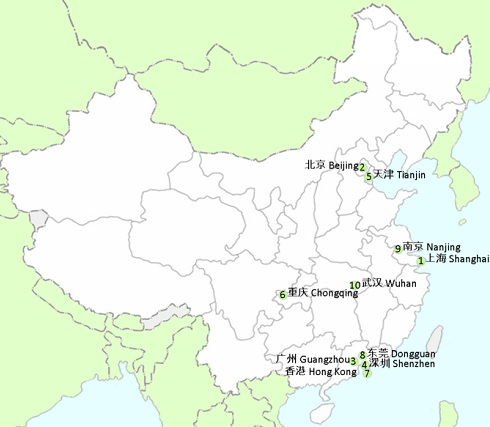 Back to Top of Map China Cities

The National Central Cities of China

The concept of national central city was first in use in 2005 as a first step in reforming urbanization in China. National central cities are a group of cities in charge of developing, leading and performing tasks in political, economic, and cultural aspects.

They have great impact on their surrounding cities on modernizing and integrating services in fields such as infrastructure, urban planning, finance, social welfare, sanitation, public education, and business licensing, etc.

The five national central cities are among the top ten China cities by the biggest population, they are: 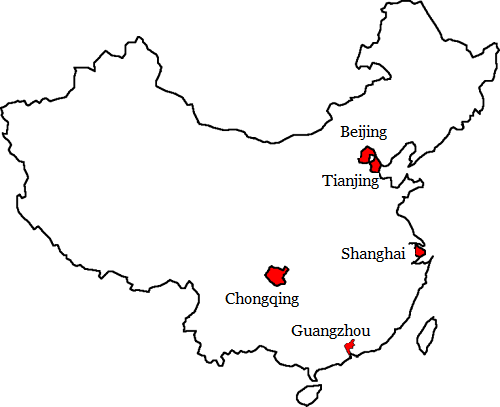 Other Major Cities of China with Map

The city information will be added one by one soon.

Kunming: The capital city of Yunnan Province and the "Spring City in China."

Sanya: The southernmost city in China. It's also one of the most popular tourist destinations of China.

Guilin: a place where "the scenery is peerless under the heavens."

Lanzhou: "the Capital of the Yellow River" and "the City of Mountains and Water".

China Travel: What You Need to Know

Back to Top of Map China Cities