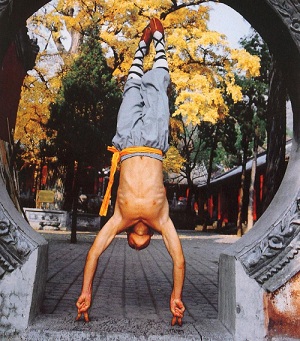 Shaolin Wushu (Shao Lin Wushu or Shao Lin Martial Art) is one of the various styles of Chinese Kung Fu, and a very influential one. It is named after the Shao Lin Temple located in Dengfeng County, Henan Province.

The monks in the Shao Lin Temple began to study martial arts during the Southern and Northern Dynasties and this tradition prevailed during the Sui and the Tang dynasties (581-907 AD).

Shao Lin boxing has compactly designed routines. Its movements are quick, powerful and flexible; they are practical for both defense and attack.

The most outstanding characteristic of Shao Lin boxing is that the practitioner works in a straight line. It means that his movements of advancing, retreating, turning around, sideways, or jumping are restrained on one line. His arms are kept slightly bent so that he can stretch out to attack or withdraw freely for self defense.

Another characteristic of Shaolin Wushu (Kung fu, or martial art) is to maintain the body in perfect balance, as stable as a mountain. The practitioners should keep a tranquil mind but strike with great force and speed.

He should be good at "borrowing" force from the opponent. That is, he should not meet the opponent's strikes head-on, but take advantage of the striker's force and go along with it to bring him to ward off a force of a thousand weights.

The practitioner should know how to make feigned strikes and when striking, hit the vital parts of the opponent. The movements should be as dextrous as a cat, powerful as a tiger, swift as a dragon, quick as lightning and the yelling as loud as thunder.

Shao Lin Wushu is a very convenient sport, for the practice does not need a large space and is not affected by weather or the kind of weapons used.

Find out which visa you need to visit Shalin Temple

How much your money is worth in China today

There are many routines in Shao Lin Wushu.

The external exercises include:

The internal exercises include:

Shao Lin boxing can be practiced singly or in pairs. The dual routines include: