Chinese characters (some people call them Chinese symbols) have evolved from their primitive forms to their modern styles through many phases.

The major styles include oracle bone inscriptions, bronze inscriptions during the Western and Eastern Zhou, scripts popular during the Warring States Period, and the seal script characteristic of the Qin Dynasty.

These are the archaic forms and styles.

Bronze inscriptions were those marked on bronze objects.

Regular script appeared later and came to be the popular and standard style of the Chinese written language, and is the one still in use today.

As for the running and cursive scripts, both were created for efficiency in writing and as a form of art; they are supplemental to the regular script.

The early stages of the development of characters were dominated by pictograms, in which meaning was expressed directly by the shapes.

There are six ancient categories of Chinese characters, sorted according to the way they were created: 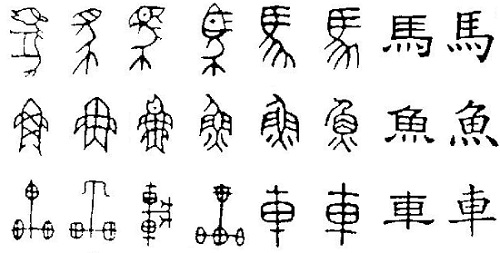 Samples of the development of characters: The first row: horse; the second row: fish; the third row: chariot (it also can be used as a general term for vehicles).

Of the remaining ninety-six percent, some are combined-meaning characters, which are characters combined from multiple parts indicative of meaning. But most characters are pictophonetics, characters containing two parts where one indicates a general category of meaning and the other the sound.

Chinese words are normally composed with two or more characters. Chinese idioms are characterized with four characters. They are also Chinese fables, because there is usually a story behind the idiom, such as "