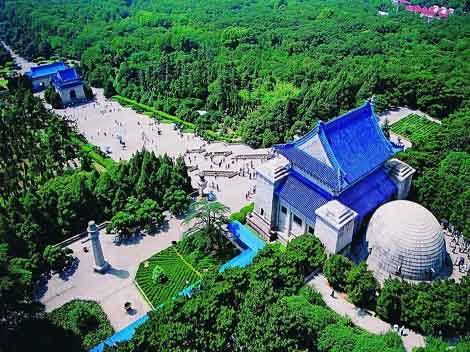 Sun Yat-sen Mausoleum, or Zhongshanling known to Chinese people, is the burial site of Dr. Sun Yat-sen, or Sun Zhongshan.

Dr. Sun was born in Guangdong province of China on November 12th, 1886, and died in 1925 in Beijing, China. He is considered to be the "Father of Modern China" both in mainland China and in Taiwan.

On April 23rd, 1929, the Chinese government appointed He Yingqin to be in charge of laying Dr. Sun to rest. On May 26th, the coffin departed from Beijing, and on May 28th, it arrived in Nanjing. On June 1, 1929, Dr. Sun was buried there.

In March 1912, when Dr. Sun was the provisional president of the then Republic of China, he once went hunting on Zijin Mountain with Hu Hanmin and others. As he gazed at the winding Qinhuai River, followed by the green mountains behind, the Ming Dynasty Tomb to the left and Linggu Valley to the right, he smiled and said to his close attendants, "The day I die, I wish to rest my body down here."

In March 1925, Dr. Sun fell seriously ill and was on his deathbed. As he was sleeping, his wife Song Qingling, He Xiangning and Wang Jingwei began to talk about his funeral. Wang suggested his remains be buried on Jingshan Mountain in Beijing. At that very moment, Dr. Sun woke up and said, "No, no, I want myself to be buried on Zijin Mountain." Everyone present was astonished and immediately consented to his request, though none of them knew where the so-called Zijin Mountain was located.

After his death on March 12, 1925, his coffin was temporarily put in the Temple of Azure Clouds on the Fragrant Mountain (xiangshan), while the mausoleum was being built on the southern slope of Zijin Mountain, according to his will. A grand foundation-laying ceremony was held.

In 1928, the Kuomintang government designated the entire Zijin Mountain as the Sun Yat-sen Mausoleum and upon completion of the mausoleum, Dr. Sun's coffin was brought from Beijing to be buried there. In 1961, the mausoleum was declared by the State Council to be a key protective unit of cultural relics.

It faces the plain with the verdant mountain at its back, enjoying a regular layout and a spectacular appeal. 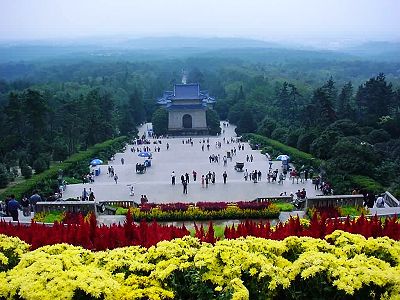 The mausoleum was designed by Lu Yanzhi, an outstanding Chinese architect who was concurrently the architect of tomb construction at that time. The plane of the entire mausoleum ensemble looks like an alarm bell with a far-reaching significance.

2297 feet (700 meters) long with a 229.7 foot (70-meter) difference in height, the path from the mausoleum gate to the tomb chamber has 393 steps and 10 platforms. The arched tablet, the tomb path, the mausoleum gate, the tablet-pavilion, the sacrificial hall and the tombchamber are all vertically situated on the same axis. 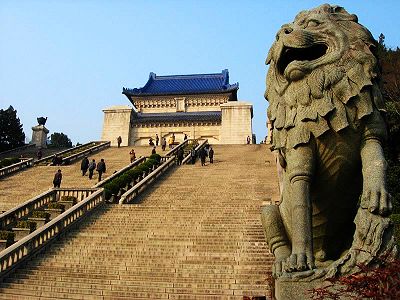 Main buildings of the mausoleum were built with solid and beautiful granites and Jinshan stones which mostly came from Fujian province, Suzhou, Beijing, Qingdao and Hong Kong, etc. The archway and the top of the sacrificial hall are all covered with glazed blue tiles, appearing magnificent, tranquil, spectacular and solemn.