Philosophy and Chinese religions have been intertwined since ancient times. Some people joke about it, saying that philosophies are Chinese soulcare products. Though it was a jest, a grain of truth shines through it.

Furthermore, there is at least one woman who has said that philosophy is also good for skincare.

I'm not joking. Since we're going to talk about something serious on this page, let me finish this tale before we go on. This woman is one of our colleagues. She ís pretty, but she majored in philosophy.

A male preacher once looked at her up and down when he heard of her major, then began making fun of this by quoting, "When a woman studies philosophy, it's unfortunate for philosophy; it's also unfortunate for the woman. " She laughed it off, saying, "What an old chestnut. I believe you can do better than that. And do you know philosophy skincare is one of the best products?"

"Yeah, good philosophy should not only care for your soul but your skin too. A happy person looks young. Only low quality philosophy kills, both soul and skin. "

Half Philosophies, Half Religion

Yin and Yang in Chinese Religion 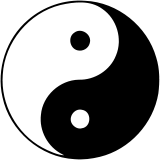 While multiple gods, ancestors, heros and the Tian were worshipped, the concept Yin and Yang were developing too. The early Chinese people noticed that all things found in nature contained two conflicting forces, Yin and Yang.

Yin is represented by the moon ( a Chinese name for moon is Tai Yin, meaning a big Yin), its characteristics were passive, dark, and cold, a female force. Even numbers are considered as yin in I-Ching.

Yang was represented by the sun ( a Chinese name for the sun is Tai Yang, meaning a big Yang). It's a male force, warm, positive and full of light. Odd numbers are considered as yang in I-Ching. This is one of the reasons why the number 9 is a lucky number for Chinese people.

The yin and yang concepts were carried further into the ideologies of Taoism and Confucianism that developed later.

In the beginning, Taoism was not really a religion in China.

Around 600 BC, under the Eastern Zhou (Chou) Dynasty, there were quite a few new ideas in Chinese religions. A philosopher named Lao Tzu wrote a short book called Dao De Jing which established Taoism. Its influence is massive, both inside and outside China.

Tao is literally translated as "the path", "the principle that governs all things" or "the way." However, the term Tao doen't really have a conclusive definition, but refers to a wide force in nature and is considered the source of all things. The opening line of the book John in Bible says "In the beginning was the Word... " The term "Word" was translated as Tao in the Chinese Bible.

Taoism teaches that there is an universal force flowing through all living things, and that respecting this force is essential to a happy life. People should not try to get their way by force, but through compromise and allowing the natural forces flow. Taoism is "philosophy Skincare and Soulcare" for many.

Though the purest Tao is more a philosophy and a way to live than a religion, it has been mixed by some of its followers with magic and alchemy to form the Tao religion which has a goal to pursue eternal life. Lao Tzu was seen as the founder of Tao religion. He was also cannonized as one of the three Tao dieties and worshipped by some emperors later.

Here are some quotes from Lao Tzu.