A number is perceived lucky or unlucky depends on what it is associated with.

Chinese numbers are often thought of lucky when their pronunciations are similar to a Chinese word that carries a positive meaning or auspicious connotation.

Like the westerners have a reason to believe that number 13 is unlucky, Chinese people also believe certain numbers are unlucky and try to avoid them as much as they can. It seems that the desire to be fortunate and have the favor of fate runs in the veins of all humanity.

Among all the single digit numbers, 2, 6, 8 and 9 are the Chinese lucky numbers. Of these, 6, 8 and 9 are the most sought out. Their various combinations can be very popular when it comes to be the numbers of address, automobile license, telephone numbers, the opening day of a business and wedding dates. 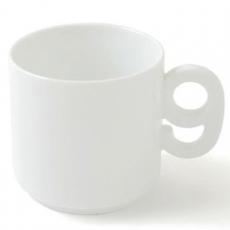 Nine is one of the Chinese lucky numbers. 9 sounds like Jiu in Chinese Mandarin, sharing the exactly pronunciation of another Chinese word

, which means "long lasting". It's especially good and lucky for weddings and birthday parties. In a wedding, it means that the couple would be happily together forever; in a birthday celebration, it means longevity.

The number 9 has been holding a high place in Chinese people's heart. They refer the heavens as "9 heavens" with names such as Jiu Tian, Jiu Xiao and Jiu Chong Xiao; China is also mentioned as Jiu Zhou by the learned sometimes.

There are only ten one-digit numbers and 9 is the highest one among them. All the other numbers are formed by the combinations of the ten basic numbers.

According to I-Ching, a well known book that has a complex divination system which Chinese people called Yi Jing or Zhouyi, other English traslattion are the Book of Changes or the Classic of Changes, odd natural numbers are Yang numbers, and the number 9 is the extreme end of the basic Yang numbers, meaning it is very auspicious. (This is why that the Double Nine Festival is also called Chongyang. Chong means double.)

Maybe it is due to this reason, the capital city of China, Beijing, has 9 ancient city gates; the four turrets of the Forbidden City have 9 beams and 18 pillars each.

One of the four turrets of the Forbidden City, Beijing, China

There are 9x9 golden studs on the emperial doors, and 9 dragons on the imperial dragon walls. It is said that there are 9999 rooms in the Forbidden City; Another source says that there are 8600 in reality.

Though 9999 fits better for the empiral archtecture and the minds of the emperors, 8600 is also a good number for a palace. You'll find out why after you finish reading this article. 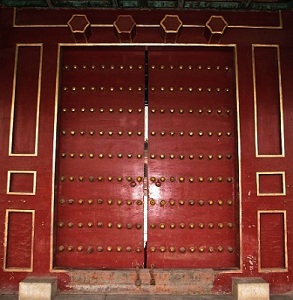 This is the door of a minor palace that prepared for the emperor's temporary dwelling when he came out of the capital occationally. It is now a museum near Beijing. 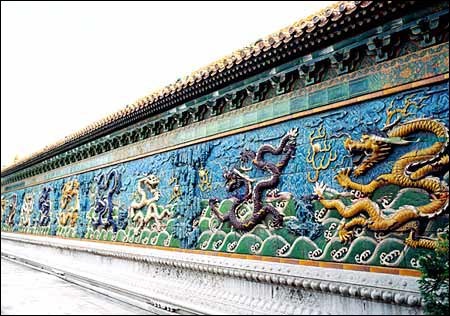 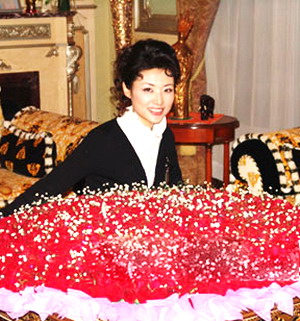 This is Zhou Tao, one of the hostesses in China's Central TV Station. She received 999 roses before a Valentine's Day. The Chinese lucky number 9 was tripled in the wishes carried by this present.