How did the ancient Chinese view life after death?

Life after death has been a mystery to all of humanity. However, there were some strong beliefs about the world in some ancient civilizations, including Egypt and China.

Chinese people believed that they would experience a celestial life after death just like the one they were having on earth. This belief contributed to the after life dynastic Chinese religion.

That's why some of the Chinese emperors of the first dynasties made efforts to bring their earthly possessions, both materials and human resources, such as servants and officials, with them when they died. They wanted their afterlife to be ensured of the same quality as their earthly existence.

This idea brought an unnatural end to many lives of their servants and officials because they were to be sacrificed at the funerals of their lords. In ancient China, the belief of the afterlife didn't bring hope but actually despair to many.

It's also due to this religious belief of life after death, the first emperor Qin Shihuang had the terracotta army built to protect him on the other side of life. His son ordered all the women who served his father and had no children to be buried with him.

It is said that Cixi, one of the two powerful empresses in Chinese history had a paper army buried with her along with numerous treasures. 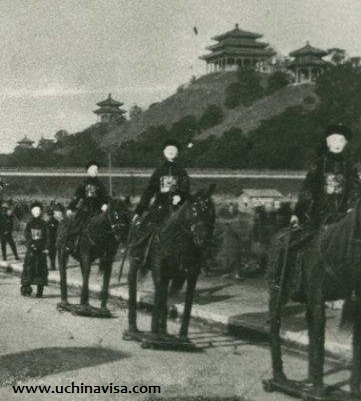 According to the book The Ancient Catacombs by He Yunao, a history professor in Nanjing University, after 600 years of prohibition of burying the living with the dead, the first emperor of the Ming Dynasty Zhu Yuanzhang (1328-1398) resumed this custom and had 38 concubines "serve" him after his death.

The sixth emperor of Ming ordered a stop for this cruel custom, yet in his catacombs, many servants with fruit plates or other serving utensils were found dead in a messy mass. It is guessed that these servants were ordered to walk in the tomb with these utensils to serve and then were sealed alive inside the catacombs. They were not as lucky as those concubines.

These stories are very gloomy and unthinkable for a modern mind. We'd much rather see what was similar to the afterlife depicted in the movie Mulan: when ancestors are dead, they could still participate in their descendants' lives when needed, as if they were alive, only more powerful.