People in the Shang Dynasty and the dynasties after it believed that their ancestors, grandparents and parents would have the power to affect their offsprings' fates when they died, either becoming gods themselves or at least acting as intermediaries between the gods and humanity.

The American animated movie Mulan produced in 1998 by Walt Disney Feature Animation depicted this kind of ancestor worship and how the ancestors would intervene in the family matters. That's how the maiden Hua Mulan got her guardian dragon Mushu according to the film.

Though there was no such a plot mentioned in the original Chinese poem Mulan, on which the movie story was based, the film integrated this Chinese cultural element, ancestor worshipping, as a humorous inclusion in the movie, expressing the Chinese belief about life after death.

Ancestor worshipping was not only one of the ancient China religion activities, it's also rather active today. Many families have formal or informal shrines dedicated to their elders who passed away. Some families don't really believe it, but keep this tradition "just in case." 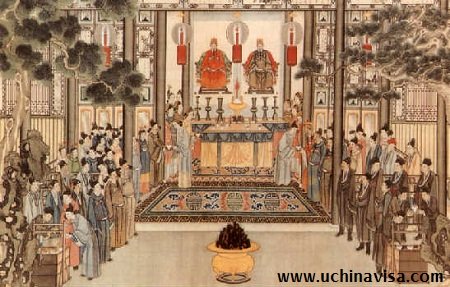 Ancestor worshipping today in cities. The activities normally are held during traditional holidays. 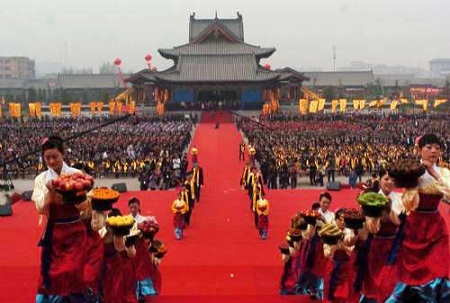 A government-sponsored ancestor-worshipping event in Hongdong, Shanxi province when some leaders from Taiwan, like Song Chuyu and Lian Zhan, went to mainland China to seek their roots. Picture credit: Chinareviewnews