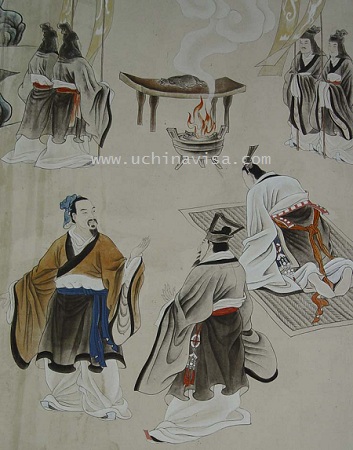 A Painting About Ancient Chinese Religion

Religion often means a strong belief in a supernatural power or powers that control human destiny.

Throughout human history, most civilizations have used religion to explain what they cannot understand, such as the origins of the universe and the fate of human lives.

As one of the oldest civilizations, the early Chinese looked to their observations of the natural world and their ancestors for these answers.

There are a few stages in the developement of ancient China religion. Polytheistic worship and ancestor worship existed from the very beginning of China and continues today.

Philosophies have been developed and molded into religions.

The earliest period known today for its religious activities in China is the Shang Dynasty (about 2000 BC). People in this time worshiped various gods, each associated with one or more elements of the natural world, such as the weather, the sky, the water and the soil, the streams, etc.

This was a time when China was governed according to the wills of the gods and spirits, called "Shang Gui" and "Zun Shen", meaning respecting and giving high regards to the spirits and gods. There were high positions created specifically for these purposes. 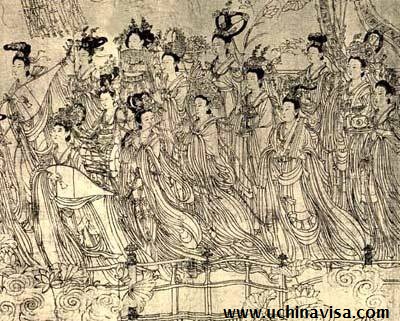 Among all the gods, a natural force called Tian (sometimes written as T'ien), meaning Heaven, was most revered. Heaven ruled over all the other gods, such as Ba Xian. 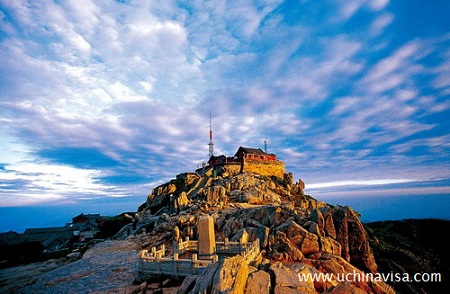 This is the top portion of Mountain Tai, or Taishan (Tai Shan), where the ealiest Chinese emperors worshipped Tian

Chinese Emperors were called Tian Zi, meaning the Sons of Heaven. They were believed to be ordained by the Heaven and the earthly realm belonged to them, including people. Without being legitimate, emperors would lose the loyalty of their subjects easily, and the new emperors usually tried to establish their reputations as the chosen ones by the Heaven first so that they could accumulate their power. 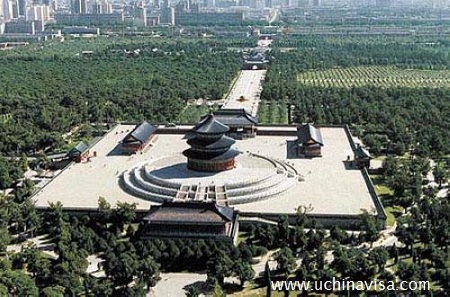 This is Tian Tan ( the Temple of Heaven), where the Chinese emperors of the Ming and Qing Dynasties worshipped Heaven.