There are lots of interesting facts about China. Here are some you might find fascinating.

Facts on China for Kids:

-- Ping pong is one of the most popular games in China. However, it was invented in Britain, where it is called table tennis.

-- The Chinese discovered two important facts about our body in the 2nd century B.C.:

The circulation fact wasn't discovered in Europe until the early 17th century by William Harvey (1578-1657).

-- Don't send white flowers to Chinese people even though the flowers are very beautiful. White is the color for funerals and mourning in China. Black is also proper in these situations.

-- Zhai Zhigang is the first Chinese astronaut who walked on the moon. The date was September 27, 2008.

-- China's capital city is Beijing in Mandarin. It's called Peking in ealier English translations. The name has been changed over history. It once was Yanjing, Dadu, and Beiping.

-- The meaning of Bejing, or Peking, is "Northern Capital." It is the second largest city in China, right after Shanghai.

-- The Chinese were using the decimal system as early as the 14th century B.C., nearly 2,300 years before the first known use of the system in European mathematics.

-- The Chinese were the first to use a place for zero in mathematics in the world.

-- In the Qing Dynasty, the privileged men and women grew long nails as a sign of their high rank. The idea was that they didn't have to work with their hands because they had people work for and serve them.

-- Women often wore decorative gold, silver and other nail guards to protect their long nails. The most known woman in this area is Cixi, the female ruler of the Qing Dynasty. See picture below. 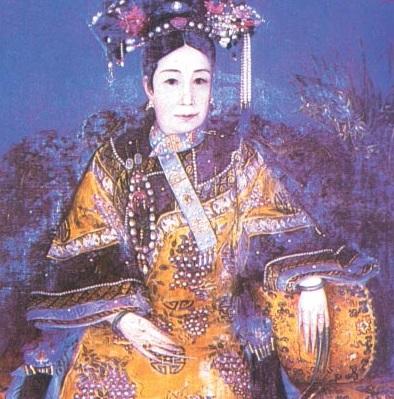 By the way, do you know what Chinese children get during the Chinese spring festival?

-- Yes. Red envelopes. They get to set off lots of fireworks too.

The Great Wall of China: