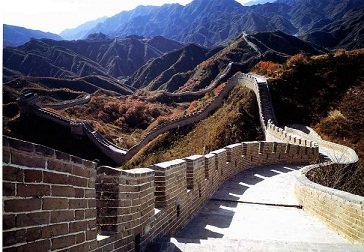 The Great Wall of China

The Great Wall of China history is as long as the wall itself. It's a huge project undertaken by the emperors of China in many Dynasties.

The Great Wall of China is acturaly a series of stone and earthen fortifications that were built, rebuilt, and maintained between the 5th century BC and the 16th century. Its function is to protect the northern borders of the Empiral China.

The wall that is most famous yet little remains is the Wall built between 220 BC and 200 BC by the first Emperor of China, Qin Shi Huang. Its location was much farther north than the current Great Wall, which was built during the Ming Dynasty.

The Great Wall is the world's longest human-made and the largest human-made structure ever built in terms of surface area and mass. The Ming Wall once was guarded by more than one million men.

The first emperor of China Qin Shi Huang conquered all competing states and unified China in 221 BC, ending the Warring States era and stablishing the Qin Dynasty.

There were a few walls built by the individual States before Qin unified China. In order to impose centralized rule and prevent the coming back of the feudal lords, Qin Shi Huang ordered to destruct the wall sections that divided his empire along the former state borders.

He then ordered to build a new wall to connect the remaining fortifications along the empire's new northern frontier in order to prevent the intrusions from the Xiongnu people from the north.

Because transporting large quantity of construction materials was difficult, the builders tried to use local resources, such as stones from the mountains in the mountain ranges, and rammed earth was used for construction in the plains.

There is no surviving historical record about the exact length and course of the Qin Dynasty walls. Most of the ancient walls have eroded away over the cause of time.

Later, the Han, Sui, Northern and Jin dynasties all repaired, rebuilt, or expanded sections of the Great Wall at great cost.

In the Great Wall of China history, defense had played an essential role for its development.

Following the Ming army's defeat by the Oirats in the Battle of Tumu in 1449, the idea of building the Great Wall was revived again.

The Ming had failed to gain a clear upper-hand over the Mongols repeadedly, and the long-time conflicts were taking a toll on the empire. So the Ming adopted the new strategy of constructing walls along its northern borde rto keep the nomadic Mongols out.

Acknowledging the Mongol control established in the Ordos Desert, the Great Wall built then was following the desert's southern edge instead of incorporating the bend of the Huang River.

Unlike the earlier Qin fortifications that mostly used rammed earth, the Ming construction used bricks and stone thus made the Wall stronger and more elaborate. As the result of the Mongol's raids that had been continuely ocurred over the years, the Ming devoted considerable resources to reinforce and repair the walls. The sections that were near Beijing, the Ming capital, were especially strong.

The Manchus were finally able to cross the Great Wall in 1644 when the Wall gates at Shanhaiguan were opened for them by Wu Sangui, a important Ming border general. The Manchus quickly seized Beijing and began the rule of the Qing Dynasty.

During Qing Dynasty, the borders of the China extended beyond the walls so the construction and repairs of the Great Wall were discontinued.

More about the Great Wall of China