The astonishing Chinese fireworks were best displayed on the opening ceremony of the World Summer Olympic in Beijing in 2008.

It began at exactly 8pm of the 8th day on the 8th month of the year 2008 (wonder why?), with a set of celestial giant foot prints in Beijing's night sky as shown in the picture below, one step followed by another along an airborne path, ushering the whole world to the ceremony location: the new national stadium, Bird's Nest.

Then were a series of hug scale, stunning and magnificent display of the Chinese fire crackers. 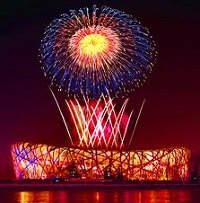 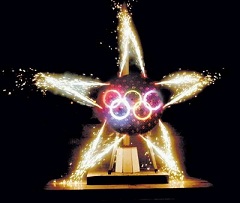 Chinese fire Crackers at the Bird Nest in 2008 Olympics

While these fascinating fireworks appeased our eyes in a superb calibration that hasn't been matched in history, the first crack of Chinese fire crackers was in an ancient Chinese kitchen some two thousand years ago.

The Origin of Chinese Fire Crackers

Picture at left: the display of the Olympic Symbol in Beijing's night sky by Chinese fire crackers.

Fire crackers began in an ancient Chinese kitchen where charcoal, sulphur and saltpeter were still commonly used. A Chinese cook mixed the components in a bamboo tube and then it exploded. The startling sound and flash made it an ideal object to fend off evil spirits or ghosts. So it has been used to send the old year away and usher in the New Year, a Chinese New Year tradition that continues today.

However, the more "mature" form of the Chinese firecrackers invention was credited to a person called Li Tian

who lived near the city of Liu Yang in China's Hunan Province in the Tang Dynasty (618-907).

You might be surprised that one of the components in making firecrackers, potassium nitrate, is also used in food and tobacco industry.

To this day, firecracker-making is the major industry in Liu Yang with the percentage as high as 90% of all the industries in this area. It also takes the leading position in the firework production field in China and is the main production area in the world for fire crackers.

Naturally, Li Tian has been treated as a hero by local people. His temple was built as early as the Song Dynasty, the Dynasty that followed the heels of the Tang Dynasty. With the god-making custom of Chinese religion, Li Tian has been worshiped as a god. People go to his temple to give sacrifices and to ask for his blessings and protection.

The Use of Chinese Fireworks

Fireworks have been used in China on many occasions: 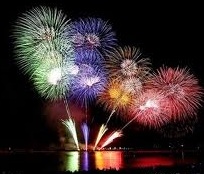 In traditional festivals, such as:

On holidays, such as:

On private occasions, such as:

On other occasions, such as:

Though the door of China closed and opened, and trade between China and other countries ebbed and flowed, Chinese firecrackers have been exported and used by many countries in their ceremonies and holidays throughout history. More countries are using firecrackers than ever before today.