The Great Wall of China Map

When the Great Wall of China map is mentioned, it presents certain uncertainty about which map is wanted because the historical changes the Great Wall has.

The Great Wall actually wasn't connected in the beginning, which means hundreds of years BC during the Warring States era. The feudal lords built their walls according to their own purposes.

When the first Emperor of China, Qin Shi Huang united the fighting states, he gave an order to build walls to connect each wall that had been built by the individual states and demolish the walls that separate his kingdom. The purpose was to centralize his rule. He also ordered the construction of the northern walls to preventing the erosion from people of Northern lands.

So there was the Qin Great Wall.

After Qin, Han and other Dynasties took over China and continued to construct, repair and maintain the Great Wall as a military defense structure.

Over time, the Great Wall of China has changed a lot. When it was the rule of Ming, the construction took new and significant meaning because the Manchu people tried to invade China constantly. The Great Wall expanded with stringer building materials like brick and stones.

So there was the Ming Great Wall.

The Qin Great Wall has mostly eroded while the Ming Great Wall is the major body of the Wall we see today.

On the following map, the Ming Great Wall is rendered in red, and the yellow lines represent the Walls built in other Dynasties. 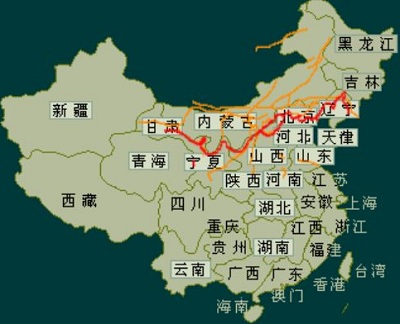 The Great Wall of China Map