The present Chinese currency is called Yuan. The sign is ￥, as shown in the picture at left. Its code is CNY.

For China or other foreign currency rates, go here.

The present China currency is called Yuan. Its code is CNY.

There are three basic measuring units for Chinese currency, the first one and also the primary one is Yuan (or Kuai as many called it), which is equivalent to the measuring units like the dollar and pound.

The other two are Jiao and Fen, which function like the dime and cent in American currency.

Here are the currency values and conversion formulas for the three Chinese money units:

It's good to familiarize yourself with Chinese money.

(You may be aware why we used 8 in this example. Yes, eight is one of the Chinese lucky numbers. We wish you good luck in China!)

China was in turmoil at that time. The areas that had been under the communists' control were expanding. Due to the need of unified currency among these areas, renminbi (rmb) came into existance.

In 1951, renminbi became the only legal currency in China, except in Taiwan and Tibet.

However, the renminbi face values of this version were too big and the paper quality wasn't good enough, so the second version was issued in 1955 and the ratio between this version and the 2nd version is 10,000:1. It soon stopped circulating. 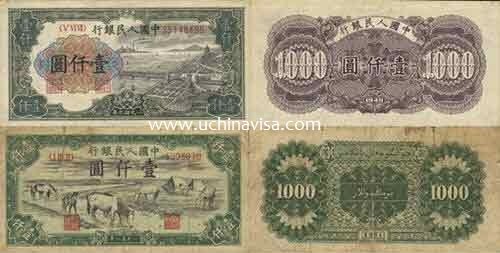 Here are one thousand yuan (kuai) bills in two designs, both sides 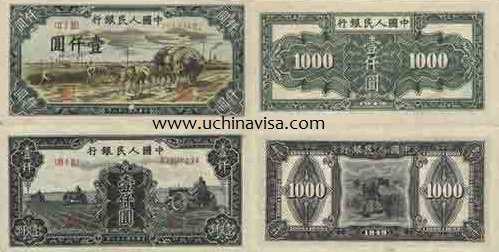 Here are one thousand yuan (kuai) bills in two designs, both sides

Go for China or other foreign currency rates