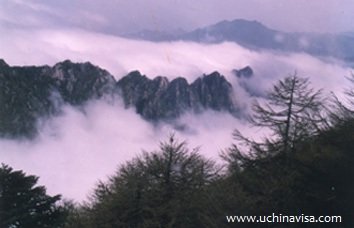 China lies mainly in the north temperate zone. Weather in China is characterized by a warm climate and distinctive seasons, with a climate well suited for habitation. It has a primarily temperate climate and obvious four seasons. Due to its vast territories, local conditions vary widely from region to region.

From September to April the following year, dry and cold winter monsoons blow from Siberia and the Mongolian Plateau, resulting in cold and dry winters and great differences in the temperatures of northern and southern China.

From April to September, warm and humid summer monsoons blow from the seas in the east and south, resulting in overall high temperatures and plentiful rainfall, and little differences in the temperatures of northern and southern China.

In terms of temperature, the nation can be sectored from south to north into equatorial, tropical, subtropical, warm-temperate, temperate, and cold-temperate zones.

Precipitation gradually declines from the southeastern coastal areas to the northwestern inland areas, and the average annual precipitation varies greatly from place to place.

In southeastern coastal areas, it reaches over 1,500 mm, while in northwestern areas, it drops to below 200 mm.

Weather in China by Regions

Weather in this region is similar to Nebraska and Kansas in the U.S., with less snow and rain during the winter. Late winter and early spring bring regular dust storms and haze.

South-Central China (such as Shanghai, Guangzhou):

Climate in this region is comparable to the Gulf Coast states, though winter storms do not occur as often. Summer is humid and hot with frequent rain. Winter is shorter, cooler, and often overcast with drizzle.

Northeast China (such as Shenyang, Harbin):

Climate in this region is similar to Minnesota. Summer is dry and hot, and winter is long and very cold.

Xinjiang (such as Urumqi, Turpan):

In this region, severe climate conditions with dramatic daily temperature swings are common. Summer can be very hot during the day, but generally cools off at night. Winter temperatures also warm up during the day but plummet at night.

Tibet (such as Lhasa, Shigatse):

When the sun shines, temperatures in Tibet reach the mid-80s in the summer and the mid-60s in the winter. At night or when it rains or snows, temperatures drop significantly. Precipitation is minimal in the winter; summer showers are more common and occur mainly at night.

Weather is important when you go to China; so are visa and currency.

Find out which visa you need to go to China and

how much your money is worth in China .