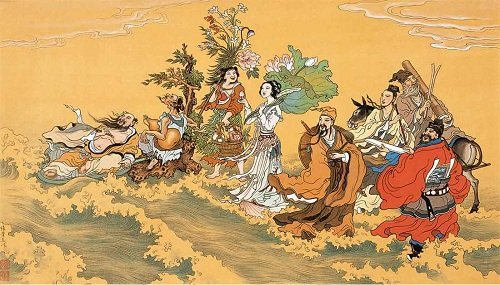 As we know that the number eight is one of the Chinese lucky numbers, there are some interesting facts associate with the group name Ba Xian. For example:

The Profiles of Pa Hsien, the Eight Immortals 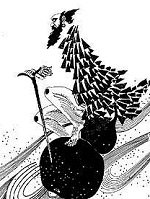 He is the lame beggar carrying a double gourd. The legend says that he was originally a very hansome man and explains the reasons of his lame state as the following:

Tie Guai Li's spirit would frequently leave his body to wander the heavens and the land because he had highly achivered in Taoism. One day he was invited to visit a divine place by another immortal. He bade his servant to look after his body when his spirit was away and burn it if he didn't returen in seven days. When he was home at the last minute, his body had been burnt because of a family emergency of this servant. He had to get into a body as soon as he could and the only body he could find was a dead lame beggar at a nearby temple. 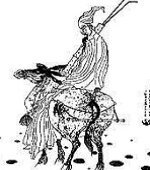 He is represented as an Old Man riding a donkey and sometimes he rides backwards.

He is usually carrying two hardwood planks. Legend says that at the end of his journeys, he could fold up his donkey like a piece of paper and store him in his pocket. When he was ready to travel again he would sprinkle water on his pocket and the donkey would reappear. 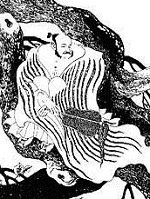 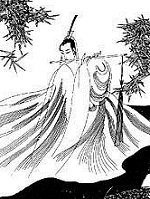 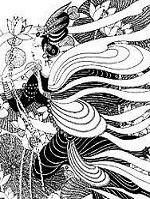 Zhong Li Quan (Chung Li Chuan): He is the Fat Man who always has his bare belly showing. He carries a banana-tree-leaf fan and sometimes a peach. He is also considered the Chief of Pa Hsien.

Han Xiang Zi ( Han Hsiang-Tsu): He is the happy Immortal that is always seen playing a flute. It is said that Han could make flowers bloom with just his will, and soothe wild animals with his music.

He Xian Gu ( Ho Hsien-Ku): "Xian Gu" means "immortal woman" in Chinese, and "He" is her last name. He Xian Gu's real name is unknown. It is said that her father's name is He Tai. She is the only female Immortal in Pa Hsien.

She often carries with her a magical lotus flower. She was brought into the group of Immortals by Lu Dong-Bin after he rescued her from a demon with his magic sword. 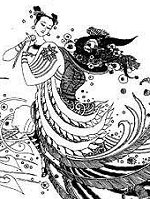 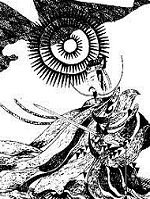 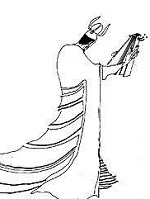 Lan Cai He ( Lan Ts'ai-Ho ): He is mistaken by some as a woman because he usually carries a basket of flowers and is young and good-looking as shown on this picture above.

It is said that he is always wearing a tattered blue gown in summer and love to lie on the snow and ice in winter. He also loves singing and his young look never grows old.

Lu Dong-Bin ( Lu Tung-Pin ): Upon his back he wears a magic sword used to slay dragons and demons. In his hand he carries a fly brush. He is said to have traveled the earth for over 400 years slaying dragons.

Cao Guo Jiu ( Ts'ao Kuo-Chiu): He is the finest dressed among Pa Hsien. He is always shown wearing formal court dress and carrying castanets. If you understand Chinese, you can plainly see the reason in his name. "Guo Jiu" is his social position, meaning the brother of the empress. Cao is his last name.