The Lost Axe here is not about the axe in the Aion Quest game. It is about a Chinese idiom "Suspect the neighbor of stealing an axe" that derived from the following story.

In ancient China, there was a man who found that he had lost his axe. While searching for his lost tool, he began to suspect his neighbour's son.

Not long afterwards though, to this man's amazement, he found his axe when he was digging in his cellar. With the recovery of his axe, when he saw his neighbor's son again, nothing about the young man's appearance and behaviour seemed to suggest that he had stolen the axe.

Now Chinese people use the idiom "Suspect the neighbor of stealing an axe" to refer to being subjective instead of objective and giving judgement without evidence. The idiom in Chinese pinyin is: Yi Lin Dao Fu. 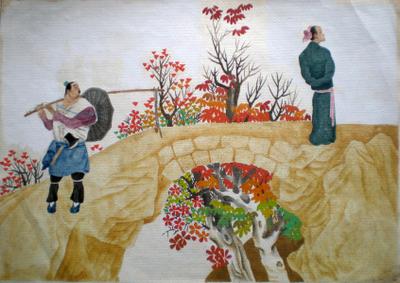 Chinese Idiom: Suspect the Neighbor of Stealing An Axe