The Double Seven (or Qi Qiao Jie) Festival is one of the most romantic traditional festivals in China. Its most popular Chinese name is Qi Xi, which literally means "The Night of Sevens."

It falls on the seventh day of the seventh lunar month on the Chinese calendar, and is also known as the Magpie Festival.

As the influence of the Western tradition increases in China in recent years and the Valentine's Day is known and celebrated by many, it is sometimes called the Chinese Valentine's Day due to it originating from the legend of the loyal love between Niulang (cowherd) and the immortal Zhinu (weaver girl).

Here is the story of Niulang and Zhinu, or The Cowherd and the Weaver Girl.

Double Seven Traditions vary in different parts of China. In general, they are better kept in small towns and villages than in big cities. The Cultural Revolution contributed to the loss of many traditions, and many local Chinese governments have been trying to revive China's traditional culture in recent years by sponsoring and encouraging local festivals and celebrating activities. 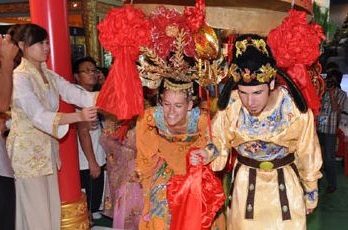 Here are some Double Seven Traditions:

Do you have your Zhinu or Niulang in China? Get a Chinese Visa and air ticket to meet him or her. :)

Read the story of Niulang and Zhinu.

The Chinese Spring Festival is the biggest holiday in China that lasts for 15 days, though workers normally have 3 days off. Here are more details.

Some people call it Pure and Bright Festival. Here are more details about this sad yet beautiful occasion.

The Chinese Mid-Autumn Festival falls on the 15th day of August every year according to Chinese Lunar calendar. To the Chinese people, its importance is second only to the Spring Festival.

It occurs on the fifth day of the fifth lunar month, fun, exciting and full of meanings.