It originates from the legend of the loyal love between Niulang (a cowherd) and Zhinu (a weaver girl). It's a love story between the stars Altair and Vega. The story of Niulang and Zhinu, or The Cowherd and the Weaver Girl.

The star Altair is called the Star Cowherd in Chinese, and the star Vega's Chinese name is the Star Weaver Girl.

In late summer, when the stars Altair and Vega are high in the night sky, we, like many Chinese children, heard the following love story when we were young. This is just one of the many versions as to the origins of the Chinese Valentine's Day.

Once upon time there was a handsome but poor boy who was called Cowherd by others because he worked the farm fields with his ox everyday. His parents had passed away and his older brother inherited the house and land. What he had was an ox. His daily life routine resembled the story of Cinderella.

The seventh daughter of the Emperor, also known as the Weaving Maid, was good at handcrafts, especially weaving clothes. The Emperor particularly appreciated her skills of weaving clouds with rainbows to make the world more beautiful.

The cowherd's ox was actually an immortal from heaven before he made mistakes and was punished to become an ox to toil on earth. The cowherd took care of him well and he loved the cowherd very much. One day, the ox suddenly said to the cowherd: "You are a nice person. If you want to get married, go to the river and your wish will come true."

The cowherd went to the river and watched the seven pretty daughters of the Emperor decend from heaven to take a bath there. Fascinated by the youngest and the most beautiful one, the cowherd hid her fairy clothes on the suggestion of the ox. When the other six fairies went away after the bath, the youngest could not fly back to heaven without her fairy clothes.

The cowherd then appeared and told the Weaving Maid that he would keep her clothes until she agreed to be his wife. After a slight hesitation, mixed with coyness and eagerness, the maid accepted the handsome man's proposal.

They loved each other very much. Zhinu was a wonderful wife, and Niulang a great husband. They lived happily together and had two children two years later.

Meanwhile, the Emperor of Heaven missed the beautiful skies once woven by his seventh daughter and asked Zhinu's grandmother to find her and bring her back. When Zhinu's grandmother, the Goddess of Heaven or Mother Godess, found out that a mere mortal man had married Zhinu, she was furious with them both and forced Zhinu to return to Heaven. 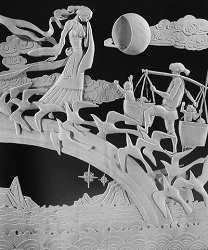 Niulang was very upset and sad learning that his wife was gone. His ox saw this and told him that if he killed him and put on his hide, he would be able to go up to Heaven to find his wife Zhinu.

With tears flowing, Niulang did so and took off to Heaven, carrying his two children with him. The Mother Goddess was very angry when she saw him coming. She took out her hairpin and scratched a wide river in the sky to separate the two lovers forever. That's how the Milky Way, which separates Altair and Vega, was formed.

So Zhinu must stay sadly forever on one side of the river, weaving on her loom, while Niulang watches her from afar.

Their love stirred the sympathy of the magpies, so they flew up into heaven once a year to form a bridge over the star Deneb in the Cygnus constellation so the lovers may be together for a single night, the seventh night of the seventh month. And the magpies are still doing this for them.

It is said that if it rains on the night of Qi Xi, they are the tears of Niulang and Zhinu crying at the misery of their life.

NOTE: There are many variations of the Chinese Valentine's Day story.

Here are the traditions on the Chinese Valentine's Day - Double Seven.

Marriage Visa and Fiancee Visa, the magpie bridge for you and your loved one in China.

Here you can find out how much your money is worth in China today.

Chinese New Year, or Spring Festival is the biggest holiday in China that lasts for 15 days, though workers normally have 3 days off. Here are more details.

Mid-Autumn Festivalfalls on the 15th day of the 8th lunar month and is also called Moon Festival, a day for moon cakes. Here is the legend of moon cake.

Qingming Festival: Some people call it Pure and Bright Festival. Here are more details about this sad yet beautiful occasion.

Chinese Dragon Boat Festival: It occurs on the fifth day of the fifth lunar month, fun, exciting and full of meanings.