Displaying firecrackers is a traditional Chinese custom, which has more than 2000 years of history. There are many occasions where fireworks are a must-have, such as Chinese New Year celebrations, wedding days, opening of a business, etc.

Today, many Chinese still treat fireworks as a way to pray for the happiness of the coming year, or a way to express wishes for a blessed marriage, or hope for a prosperous business. And this can be derived to the Warring Age in ancient China.

According to the book Jingchu Records, at the dawn of the first day of a New Year, when a rooster is calling, people get up and play firecrackers in their yards. This is how they drove the evil spirit back to the old year.

However, the firecrackers at that time were not like the ones we play today. There was no gun powder and paper yet, so people simply used a special way to fire up bamboos to make big noises. The burst of sound was quite explosive and scary.

In the Tang dynasty, firecrackers were called "explosive poles" by Chinese people. The reason might be that a long bamboo pole was used. They had a way to blast the bamboo pole section by section to obtain continuous explosive sounds. The sounds were auspicious to the ears. In fact they were so auspicious that a poet and a minister of that time called Yue Zhang wrote a poem Staying-up on New Year's Eve in Yuezhou to record the mood: "Peach branches shun away evil, and bamboo explosions woke me up to joy."

No doubt that the fireworks were an expression of the excitement and pleasure on New Year's Eve. 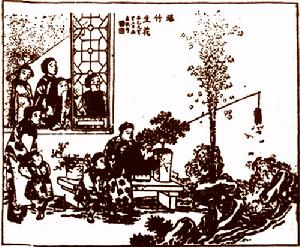 In the Song dynasty, a poet called Chengda Fan recorded the scene vividly in details: "After we finished our good meal and cleaned up, a five-foot bamboo pole was taken out and the fire materials were fed into its sections. Sweating because of the heat, a strong servant quickly removed the pole from the fire source and dashed towards the stone steps; the children ran to a safe distance while the servant smashed the pole against the stone. Thundering sounds ."

Ancient Chinese fireworks were not just for fun, they were signs of a new beginning. Poet and minister Anshi Wang recorded: "The old year was sent away by the first sound of fired bamboo, and the spring breeze sent the warmth into the city of Tusu. "

Later, with the wide spread of the use of saltpeter, sulfur and charcoal in making explosions inside a bamboo pole, the name "explosive poles" was replaced with "explosive bamboo." When bamboo were eventurally given up, "firecrackers" and "fireworks" were the names for the wonders man created.