Cai Lun is the inventor of paper and the paper-making process, one of China's four greatest inventions that affeced all of humanity.

Cai lived in the Dong Hang Dynasty (65? - 121) and became a eunuch in 75 AD. His birth date has been a debate topic among scholars. However, common people don't really care when he was born. Knowing that he invented paper a long time ago is enough.

Cai is listed as seventh of the 100 most influential people in history by Michael H. Hart (The 100: A Ranking of the Most Influential Persons in History. Another Chinese who is among the top ten of the 100 is Confucius, who was ranked the fifth. )

Though Cai's major invention is paper, it is said that he was also very good at making weapons, such as swords.

How Did Cai Come Up With The Paper-Making Idea? 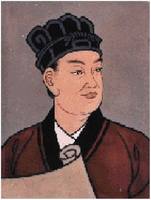 When Cai was an official, he often went into towns and villages to see how things were going. One day in 92 AD, he visited a silk-making shop and saw that there was a thin white layer of slightly fluffy stuff left on the bamboo mat, which could be used for writing.

He was inspired and began to experiment with various materials such as barks, hemp, cloth, nets, etc., and using various ways, such as boil, soak, pound, etc. to make fiber paper. No doubt, he succeeded.

He documented the process and showed it to the emperor He Di along with a finished product in 105 AD. The emperor was greatly pleased, and the paper was called "Cai Hou Paper" in honor of Cai's contribution. Fine paper officially entered into history.

As a eunuch, Cai lived to serve 4 child emperors and be favored by two empresses. It was during this year of his invention, the emperor He Di died and the youngest emperor in China was put on the throne, who was less than 100 days old, and died before he reached his 2nd birthday.

Cai was well treated and intentionally flattered by high officials when he was in power. However, when the empress who favored him died and the political wind changed, he was accused to be part of a plot that was against the rising power. He knew his fate was sealed and committed suicide.