It is assumed that Jianzhi came into existence after paper was invented by Cai Lun in the first century.

But some argued that the "paper cutting" art could use various materials such as leather, leaves, gold sheet, cloth and tree barks, etc. The skill of paper cutting may have existed, only the materials were not paper.

Actually there were gold sheet records from the Shang Dynasty and "phoenix-tree-leaf-cutting" from the Xi Zhou Dynasty. During the warring period, the flags of the armies with various patterns suggesting the art of "cutting"; they may contribute to or be the foundation of the art of Chinese paper cutting.

Chinese Paper cutting has as many styles and designs as the Chinese dialects or ethnicities. However, as a general impression, the paper cuts from Northern China are characterized with vivid folk customs, and the styles from the South are intricate and refined.

Jianzhi has developed and evolved over the long years of Chinese history. Though the styles and designs vary, the color is dominatingly red. Red is the Chinese color.

Jianzhi has been used in some worshipping and offering rituals, and it's a popular decoration during traditional Chinese festivals and holidays. People especially like to put Jianzhi on windows or doors. This gives it another name: Chuang Hua, meaning "Window Flowers."

To cut Chuang Hua is one of the entertaining forms for many women and men. Along with its other functions, it may explain its longevity.

Here are some of the representative Chinese Jianzhi

Please refer back to this page if you want copy the images below. We really don't want to ruin their beauty by putting our marks on them. Thank you in advance. Enjoy! 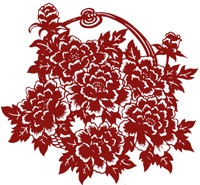 Yang Zhou is one of the places that are famous for its paper cuts. You can peek into the refined skills and styles through the pictures above. It reflects the paper cutting styles of Southern China.

When the emperor Sui Yangdi in the Sui dynasty came to Yang Zhou in the winter time, his palace women in Yang Zhou would use the Jianzhi skills learned from the local artists to cut fine silks and satins as vibrate blossoms and leaves. Then they put them on trees and ponds, mimicking the looks of spring and summer. The frozen garden and icy pond were full of life and colors.

Their creations pleased the emperor greatly. He came to Yang Zhou three times. It was not a small number for an emperor to go to the same place that was pretty far from his regular dwelling palace. 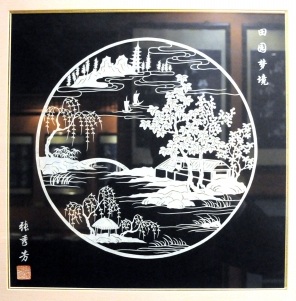 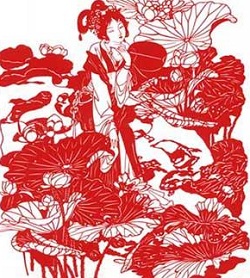 Zhang Yongshou and Zhang Yongfang are two of the many representative artists of Yang Zhou paper cuts. 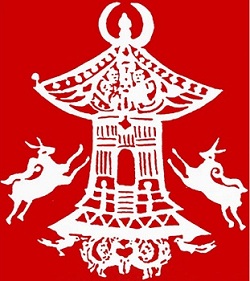 Here are two Jian Zhi patterns discovered in the Dunhuang Mogao Caves, or Mokao Grottoes in Gansu, China. One is Deer and Buddha’s Pagoda, the other Honeysuckle.

These Jianzhi were from the Tang and Wudai eras, which served as offerings and decorations in Buddhist temples and the places where they performed rites. The patterns were normally complicated and with meanings. Their discovery is the evidence that paper cuts in Gansu, China has a long history.

To be continued; links will be added soon.