We love Kung Fu Panda (2008). It's a movie with a combination of Chinese Kung Fu, a Chinese panda, some Chinese wisdom and American humor.

The Story: In the Valley of Peace, one night before an ancient prophecy will come to pass, Po the clumsy panda dreams of becoming a true master of the martial arts, and the second day he finds himself chosen as the Dragon Warrior despite the fact that he is obese and a complete novice at martial arts.

This is a story of how Po, with the help from other martial masters, transforms his greatest weaknesses into his greatest strengths and fulfills his destiny as the hero who saved his people during their darkest hour.

About Some Names in Kung Fu Panda

Oogway: "Wu Gui" in Mandarin, meaning turtle. Turtle shells has been used in Chinese character writing and religion, using the shells as oracles. Because of their long lives, they often represent wisdom. 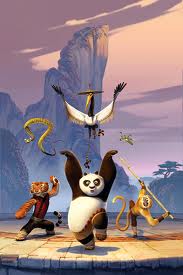 Po (the Panda): Legend tells of a legendary warrior whose kung fu skills were the stuff of legend.

Po: He was so deadly, in fact, that his enemies would go blind from over-exposure to pure awesomeness!

Gang Boss: I see you like to chew. Then perhaps you should chew... on my fist!
( smashes fist on table)
Po: (voice-over)The warrior said nothing, for his mouth was full. And then he swallowed.
(swallows)
Po: And then he spoke: "Enough talk. Let's fight!"

Monkey: (after the Furious Five bowed to Po in his dream) We should hang out.
Po: Agreed.

Mr. Ping: We are noodle folk. Broth runs through our veins.

Tigress: One would think that Master Oogway would choose someone who actually knew kung fu.
Crane: Yeah, or could at least touch his toes.
Monkey: Or even see his toes.

Po: Ow! I thought you said acupuncture was going to make me feel better.
Mantis: Trust me, it will. It's just not easy to find the right nerve points under all this...
Po: Fat?
Mantis: Fur. I was gonna say fur.
Po: Sure you were.

Po: ( looking around at the historical artifacts in the palace) Wow! I've only seen paintings of that painting!

Po: Maybe I should just quit and go back to making noodles.
Oogway: Quit, don't quit? Noodles, don't noodles? You are too concerned about what was and what will be. There is a saying: yesterday is history, tomorrow is a mystery, but today is a gift. That is why it is called the "present."

Oogway: There are no accidents.

Oogway: One often meets his destiny on the road he takes to avoid it.

Oogway: My friend, the panda will never fulfill his destiny, nor you yours until you let go of the illusion of control.
Shifu: Illusion?
Oogway: Yes. (points at peach tree)
Oogway: Look at this tree, Shifu: I cannot make it blossom when it suits me nor make it bear fruit before its time.
Shifu: But there are things we CAN control: I can control when the fruit will fall, I can control where to plant the seed: that is no illusion, Master!
Oogway: Ah, yes. But no matter what you do, that seed will grow to be a peach tree. You may wish for an apple or an orange, but you will get a peach.
Shifu: But a peach cannot defeat Tai Lung!
Oogway: Maybe it can, if you are willing to guide, to nurture it, to believe in it.
Shifu: But how? How? I need your help, master.
Oogway: No, you just need to believe. Promise me, Shifu, promise me you will believe.

Tigress: It is said that the Dragon Warrior can go for months without eating, surviving on the dew of a single ginko leaf and the energy of the universe.
Po: Then I guess my body doesn't know I'm the Dragon Warrior yet. It's gonna take a lot more than dew, and, uh, universe juice.

Po: The Sword of Heroes! Said to be so sharp you can get cut just by looking at - Ow!

Po: ( checking to make sure Shifu is okay after his fight with Tai Lung) Master! Shifu! Shifu, are you okay?
Shifu: ( coughs) Po, you're alive. Or we're both dead.
Po: No, Master I didn't die. I defeated Tai Lung.
Shifu: You did?
(Po nods and smiles)
Shifu: Wow. It is as Oogway foretold, you are the Dragon Warrior. You have brought peace to this valley and... and to me. Thank you, thank you Po. Thank you, thank you.
( slowly lays his head back down, assumingly dead)
Po: (Po looks disbelievingly at the red panda) No! No no no, don't die, Shifu please!
Shifu: I'm not dying, you idiot--
(he catches himself)
Shifu: --ah--Dragon Warrior, I am simply at peace.
(lays down and folds his hands together, smiling)
Shifu: Finally.
Po: Oh, so um, I should... stop talking?
Shifu: If you can.