The Xinhai Revolution, the End of the Emperial China 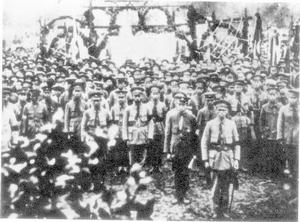 The Xinhai Revolution is named for the Chinese year of Xinhai (1911). It overthrew the ruling of Qing Dynasty (the Manchu Dynasty), and the establishment of the Republic of China. Pu-yi became the last emperor of China.

The revolution began With the armed Wuchang Uprising and the spread of republican insurrection through the southern provinces, and culminated in the abdication of the Xuantong Emperor after lengthy negotiations between rival Imperial and Republican regimes based in Beijing and Nanjing respectively, in 1900, the ruling Qing Dynasty decided to create a modernized army, called the "New Army".

At the time, the city of Wuchang, on the Yangtze River in the province of Hubei, had the most modernized military industry, so it became the site where weapons and other military equipment for the New Army were manufactured.

The revolutionary ideas of Sun Yat-sen extensively influenced officers and soldiers of the New Army in Wuchang, and many participated in revolutionary organizations.

The uprising itself broke out largely by accident. Revolutionaries who intented on overthrowing the Qing dynasty had built bombs and one accidentally exploded. This led police investigation, and the lists of revolutionaries were discovered.

At this point, parts of the New Army led by Huangxin didn't want face arrest and revolted which made the provincial government panick and flee.

The revolt might just be one of the latest in a series of mutinies that had occurred in southern China; but the Qing goverment failed to respond for a crucial few weeks, allowing time for the provincial assemblies in many southern provinces to declare independence from the Qing and allegiance to the rebellion. Within a month, representatives of the seceding provinces met to declare a Republic of China.

Sun Yat-sen, a uniting figure in post-Imperial China, was travelling in the United States at that time in an effort to recruit more support from the overseas Chinese. He found out about the uprising by reading a newspaper report and immediately returned to China.

The Yangtze overflowed its banks with 100,000 fatalities in 1911, and the revolting troops were situated near that river. The flood would have had a profound psychological impact on any government officials, rebels, peasants, and other Chinese in the vicinity.

On 29 December, Sun was elected as the provisional President of the Republic of China and 1 January 1912 was set as the first day of the First Year of the Republic. This republic calendar system is still used in Taiwan today.

The Xinhai Revolution is a great political action that waved the first democracy flag in China, rushed China into a new era.